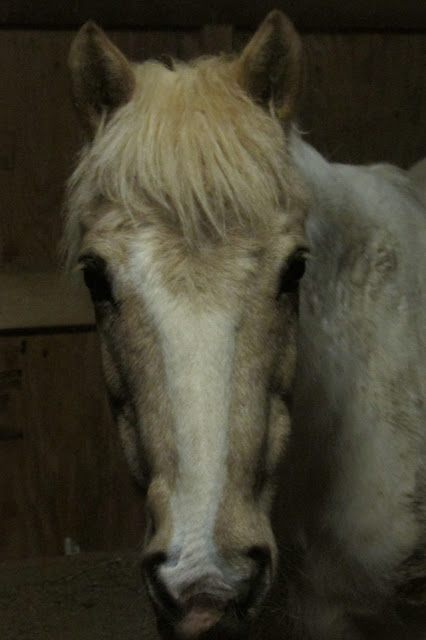 Though her birthday is necessarily somewhat approximate - she was born in the Fire Department herd that runs on Assateague Island - my Chincoteague pony mare turned 30 this spring. It's a respectable age for any equine, so i took a few quick photos to mark the occasion. (They're all a little dark, because she doesn't much fancy the flash, and it seemed mean to blind her with it while she was still enjoying her birthday peppermints...)

She's a pretty girl, through a bit ragged in the spring as she's shedding out her truly prodigious winter coat - you can see patches of longer hair peeking out under her forelock (always the hardest place to get shed out), while the coppery palomino patches are starting to show through on the rest of her body.

And as further evidence of the luxuriant quantity of her winter coat, here's a picture of what i took off her with a curry before taking her picture: 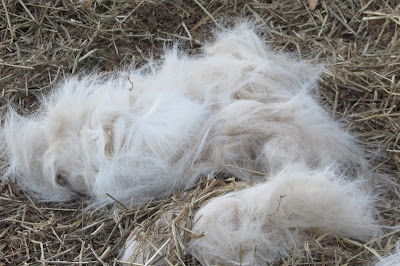 Posted by Fripperie at 7:26 PM No comments: 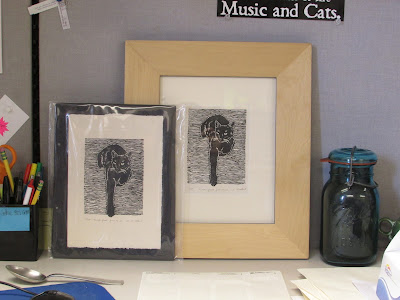 Office visitor, upon spying the cat print - my proof of "Best foot forward" - that i have propped on my desk: "Ooh, is that a real print?"
Me: "Made with my own two hands..."
Told him about how i came to make that one, said that yes, i did have several left from the edition, let him know he could get it from me directly, scrawled out the Etsy shop address, and mentioned a local consignment venue too - though he said he'd much rather get it direct. (Suits me!)
Turns out, he's a local sculptor and longtime buddy of the founder of the wee local arts nonprofit where i toil away on development. Yesterday he stopped by again to pick one up for himself. And apparently showed it to anybody who would hold still long enough, on his way out... i was flagged down by the owner of the little leather shop next door on my way out, with "You made that print Malcolm had...?"
So i'm glad he was tickled with it, and it's a nice little ego-biscuit for me, too.
Meanwhile, lots of prints are going to various auctions for organizations around the area. There's always a flurry of them in the spring - this week it's the Virginia Association of Museums, the dances run by Bluemont Concert Series, and the Lincoln Elementary PTO. Go forth and support your local cultural institutions, folks! And maybe get some fun art in the process...
Posted by Fripperie at 12:22 PM No comments: 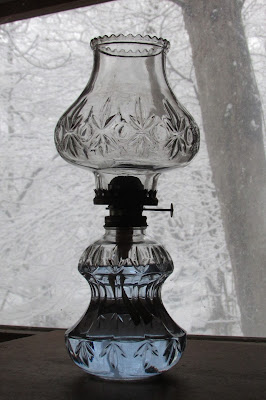 Thrift store FTW! After my trusty Aladdin oil lamp developed a messy, smelly leak - taking out a sweatshirt in the process - i tried to replace the lamp reservoir at Nichols' Hardware, the beloved local institution where i bought it many years ago... alas, Nichols' had nothing left for Aladdin lamps, save one lonely mantle for a kerosene lamp. I picked up a middling bottle of lamp oil, and left in dismay.

Next, i trotted around the corner to the thrift shop to seek a replacement for the now-soaked-with-lamp-oil sweatshirt, and found there a rather nice complete oil lamp, a good haul of vintage sewing patterns and sewing-related Farm Bureau publications (1940s-1960s), an early 1950s edition of the Dan River textile dictionary (i have a 1990s one, issued to me when i trained at G Street - it's decent on general textile terms and fabric names, weaves, and finishes - but it's really great for dating all those obscure fabric-related brand names, so this one will go in the vintage reference library), a sheet of chicken stickers (because chicken stickers), a 1940s square-ish Atlas quart jar, and, yes, the sweatshirt i'd gone looking for in the first place (unworn, still with inspection stickers on it). After cashing in my recently completed discount punchcard for the shop, the entire haul ran me $16 and change, which i ought to be able to cover again once i sell a few of the patterns. 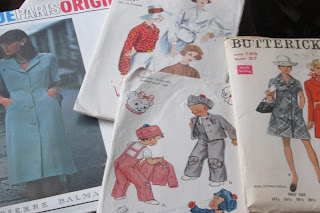 Posted by Fripperie at 12:04 PM No comments: 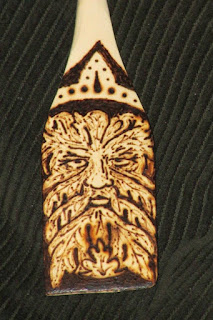 January looks like as good a time as any to dust off the blog, and for starters, i thought i'd share this year's one-for-everybody-on-the-list handmade Christmas gift (i mean, besides the apple butter, which, while tasty, isn't terribly photogenic...). I indulged in a new woodburning pen - hurrah for those absurd 60% off craft store coupons - since the old one i'd had as a kid had been purged by the parents at some unknown point in the past, and stocked up on packages of assorted wooden kitchen utensils.


The nice thing about spoons and such is that although the space you've got to work with is a bit of an odd shape, it's not so much area that it's really daunting. And also, there's the fact that you can get a pack of spoons for a couple bucks at the grocery store, making it an excellent last-minute gift candidate that's easy on the budget. This greenman i did on a spatula with a particularly wonky handle for practice and my own use (because even a wonky-handled spatula is still useful).
Posted by Fripperie at 2:25 PM No comments:

I could have - and probably should have - chosen the easier route for this commission. There were two photos of a young black cat to work from, one of which would lead to a pretty straightforward print, requiring only a bit of fiction to make the background carve-able, and the other, which looked more complicated every time i peered at it. 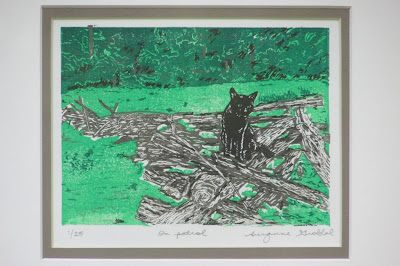 Naturally, i picked the more complicated route, a neat shot of the kitty perched on a section of worm fence. It ended up needing four separate blocks, printed in layers - light green, then dark green, then grey-brown, and finally black. It was fussy to do, and there were inconvenient hitches like an arm injury that set things back, and it ended up taking far longer than i'd expected, based on the original plan of a simple, single block print. Feeling a bit guilty for getting the timeline wrong, i decided i ought to do a print from the other photo, too (and in fact, that was something i was able to put together pretty quickly, while finishing the last stages of the original choice). I finally drove out and delivered both today, and was relieved that they were greeted with oohs and aaahs - commissions, while they're fun challenges, are always a little nerve-racking, and this one was for friends, the proprietors of my favorite little used bookshop. 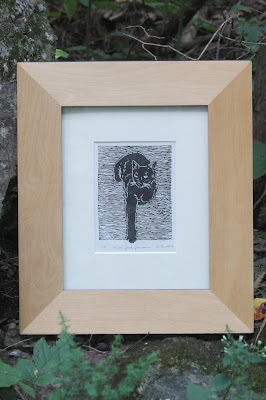 There's an edition of each, so they'll be making their way to the shop sooner (for the simpler one) or later (for the four-color monstrosity, because i haven't even completed the edition yet, and i'm going to need more ink).

And i think i've had enough of carving wood grain for a while...
Posted by Fripperie at 10:57 PM No comments:

We had a family wedding to go to, in southern Virginia, at the back end of June. That's a recipe for miserably hot and swampy, and i decided to play it safe and make something cool and breezy to wear. It's not a vintage pattern (it's a current McCall's issue, in fact, and if i get organized enough to remember, i'll slip the pattern number in later for folks who are curious...). [update for the curious: the pattern number is 6954]

What with travelling down there, and lodging and whatnot, there wasn't really room in the budget for a fabric splurge, so i started rummaging in the stash: the first thought for hot and sticky weather, of course, is linen, and i had a length of uncommitted linen sitting around from a crazy clearance buy. That had promise, but the piece proved to be scandalously sheer, and i knew i'd have to put something either over or under it.

After a bit of head-scratching, i thought about a piece of embroidered cotton batik i had: i'd bought it (online, following one of those seductive you-might-like-this-one-too links), thinking it was rayon and not realizing the link had led me away from the rayon batiks into the cotton ones. The crisper cotton was totally unsuitable for the original project, but since it was my own damn fault for not reading closely - and it was a pretty piece - i tucked it into the stash, trusting to find a purpose for it eventually. I cut the batik on the bias, hoping the more relaxed drape of the cut would make up for the difference in the body of the fabric.

Since i had the pattern on hand from one of the pattern-for-a-buck sales, the only thing i had to buy for the project was thread to match the linen, and that only because i needed a closer match for topstitching.

I finished in time for the wedding (although i admit there was hemming going on the morning of - that curve in the hem makes it a heck of a lot longer than you'd think from the fullness of the dress), and it was fully inspected by several sisters-in-law, at least one of whom sews for a living, so i figured i might as well enter it at the county fair this summer. Honestly, i'd have been a little cranky not to have scored a ribbon, but i was chuffed to get best in show as well. 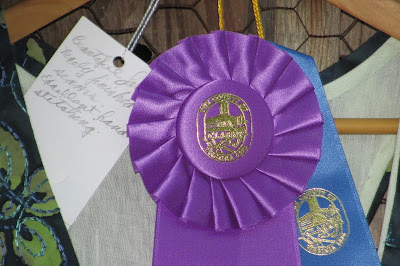 And the mostly done part? Well, some of the chain-stitched embroidery on the batik didn't catch properly, and since i was already pushing my luck for what i could get out of the yardage on hand by cutting on the bias, there was no working around it... it's not too obvious, but at some point, i'll go back and rip out the fouled-up spots and re-do it by hand. I've saved a pile of the floss from the scraps and the facings, and at least chain stitch is sort of pleasant to work by hand, if you're not in a mad rush.

Steam show, mule jump, flea market junk to peruse (passed on a treadle with really interesting irons, but lacking its coffin top). Milkshakes for lunch, and sweet corn for dinner. 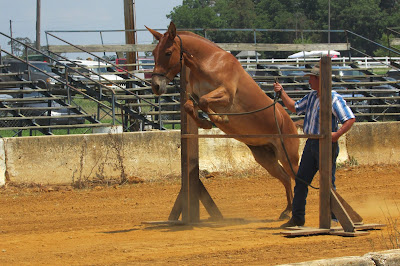 Posted by Fripperie at 11:27 PM No comments:

Promote Your Page Too